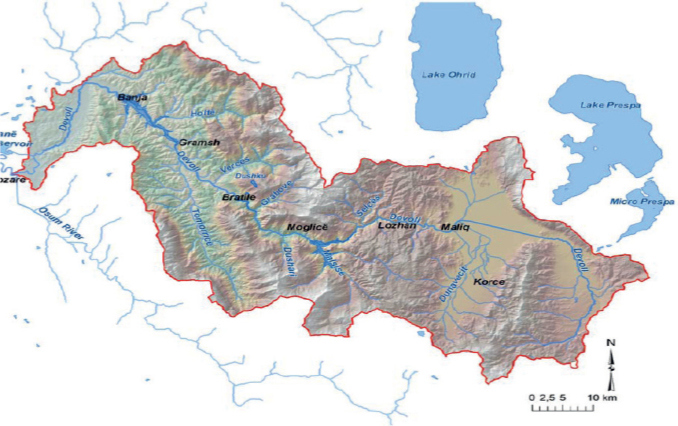 The Devoll Hydropower Project is located in the Devoll Valley, in the south-eastern part of Albania.

In the Concession Agreement the project or concession area is defined with the area of the Devoll River between 95 and 810 m above sea level, which is located between Banjë Village in Cërrik Municipality of Elbasan District and Maliq Municipality in Korçë District.

The Devoll catchment area covers the Korçë plateau, the mountainous middle reaches of Devoll and Tomorricë rivers down to Gramsh and the undulating hilly countryside from Gramsh down to Kozare. At Kozare in Kuçovë District the Devoll River joins with Osum River and takes the name of Seman River, which in turn flows into the Adriatic Sea.

The direct project area spreads over the districts Elbasan and Korçë and is implemented in the current Municipalities of Cërrik, Elbasan, Gramsh, Maliq and Korçë.

The Devoll Hydropower Project consists of development, planning, construction and operation of two hydro power plants, Banjë HPP and Moglicë HPP, with an installed capacity of approx. 269 MW and a planned generation of approx. 700 GWh/year. The investment decision for a third hydropower plant, Kokël, will be considered once the first two hydropower plants have been completed.

The Project Scheme was developed based on a concept presented by the Austrian company EVN AG, which was the development partner of Statkraft until 2013, when Statkraft acquired EVN’s shares and became the sole owner of Devoll Hydropower Sh.A.The Project started its initial site activities as part of the Pre-Construction Phase in 2009, after the approval by the Albanian Parliament of the Concession Agreement.  In 2013 started the construction of Banjë HPP, which was finalized and entered into operation in 2016. Construction in Moglicë HPP started in 2015 and the power plant entered into operation in 2020.

The investment cost of the Devoll Hydropower Project is estimated to be approx. 590 Million Euro.